According to nameless people on the internet, the Chinese invented the wheelbarrow.  It doesn't seem at first glance that they made a great job of it.  Their wheel is big, and right in the middle, so needs to be covered up.   So it's kind of a big fender with two running boards.  There's a platform on either side, and maybe the "fender" is made of poles or slats so there are places to tie things. 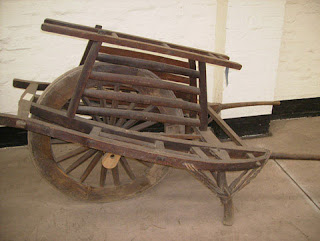 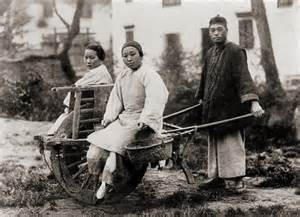 I found an explanation on a page on sustainable transportation, that defends the design:

For being such a seemingly ordinary vehicle, the wheelbarrow has a surprisingly exciting history. This is especially true in the East, where it became a universal means of transportation for both passengers and goods, even over long distances.
The Chinese wheelbarrow - which was driven by human labour, beasts of burden and wind power - was of a different design than its European counterpart. By placing a large wheel in the middle of the vehicle instead of a smaller wheel in front, one could easily carry three to six times as much weight than if using a European wheelbarrow.
The article at their link above ("The Chinese Wheelbarrow" by Kris De Decker) was their source, and  has this interesting bit (and a great deal more):


Compared to a two-wheeled cart or a four-wheeled wagon, a wheelbarrow was much cheaper to build because wheel construction was a labour-intensive job. Although the wheelbarrow required a road, a very narrow path (about as wide as the wheel) sufficed, and it could be bumpy. The two handles gave an intimacy of control that made the wheelbarrow very manoeuvrable.

There are two versions of the longer article, and each has a few photos the other doesn't have:

Kris De Decker's article is as much about the history of roads as of wheelbarrows, which is also fascinating.  Please read it if you're at all interested in the history of China or Europe, or at least look at the pictures on both of them.  There is a list of 21 sources on which the author drew there, too.  I learned a lot!

The European wheelbarrow is a whole different design and for a different purpose.  In the Chinese version, the wheel takes the place of a pack animal, and the shape of the frame reflects that.  All the weight is on the axle.   The European wheelbarrow is a version of a litter or a stretcher, or for workmen, a barrow designed to be carried by two people.  So the wheel goes between the two handles on one end, and the remaining person has the other two handles, and half the weight.

The article shows a Chinese wheelbarrow carrying two people, and says they could carry six.  Women were transported that way, and one of the photos above shows one who seems to have had bound feet. If there was only one passenger and the load had no counterweight, the article says the operator of the barrow would tilt the wheel so that it balanced that way.

European litters generally carried just one person.  There are images from a French history of the wheelbarrow that show (in line drawings) people being transported.  It's not as elegant or as dignified as  the Chinese setup, and doesn't look nearly as comfortable.  With a small wheel out front, in the European version, the "seating" isn't level.

So when articles say "the Chinese invented the wheelbarrow," they invented their wheelbarrow, not the  European version, which has a lowlier purpose and smaller capacity.


I looked up the author, Kris de Decker, after writing the above.  He owns "Low-tech Magazine."  It's full of other interesting technological history and ideas.