Fishbourne Roman Palace (an archeological site and museum) had no wheelbarrow, but just before I left I saw this photo, on a display about the season of the original excavation, when they had 100 volunteers a day: 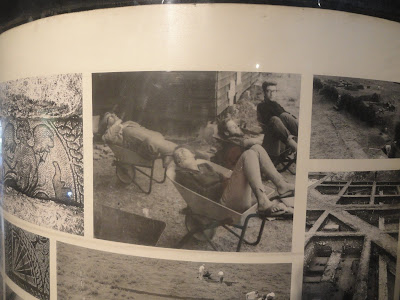 Then as we were leaving to get back on the motorway to return to Julie's, after two days in Chichester, I spotted a wheelbarrow and snapped it quickly from the moving vehicle. I was relieved to have gotten it before the van was in my way. 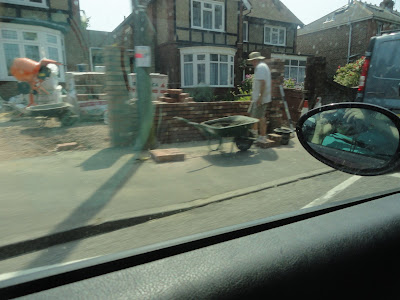 After I got home and looked, I saw that I had captured TWO wheelbarrows! :-)
The back one seems to be empty, but the central object of the image has mortar for the brick wall.

There were more wheelbarrows the day before, but their documentation is a larger project, and so I leapfrog this one in today, which is my dad's birthday. I don't remember my dad especially for dying, or even for father's day. I remember him on his birthday, which was always a week before mine (in my lifetime, that's where I saw it) and was something we shared, that week. And wheelbarrows remind me of my dad because he always had a good one, and gave me rides when I was little. My sister and cousins and I gave each other rides after that.

We weren't riding like those young adults resting in the photo above. We sat up, facing forward, legs crossed, holding the sides, feeling like we were flying. The "dismount" was sometimes a tumble, but as often as not we were gently parked by our bearer. And now, at 59, I remember that, and my dad, and can share it with others in a way he never got to see. My dad died when he was younger than I am now. He never got this old.