A Wheelbarrow for you Sandra. It is on the Platform of Hampton Court Station and I can't believe I have never noticed it before....Its chained down... and has a flat tyre, and seems to be a herb garden of sorts. It's near the entrance but to the side and slightly obscured by the cafe so actually very missable, but once I saw it I couldn't believe I had missed it all these times! Even when Holly was here. 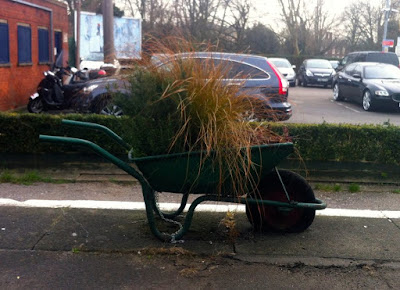 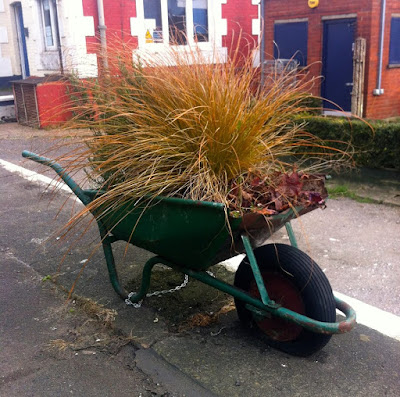 Sandra Dodd:
They're everywhere, and elegant-but-plain, and engineering masterpieces, yet mundane. Thanks for the photo!

Michelle Hodgson-Gregory:
I've never seen that either!!!!!!!! HOW MANY times have I been to that station???


As a profound trivial tie-in, the day before a wheelbarrow that is chained to the ground at Hampton Court Station travelled (its image, anyway) to Albuquerque, a banana was given a motorbike ride in Vietnam... This is drectly related to the wheelbarrow above. Okay, INdirectly related, but probably as close as Albuquerque and a Vietnamese motor bike, all in a two-day period can be!!!

Posted by Sandra Dodd at 3:40 PM No comments: Links to this post